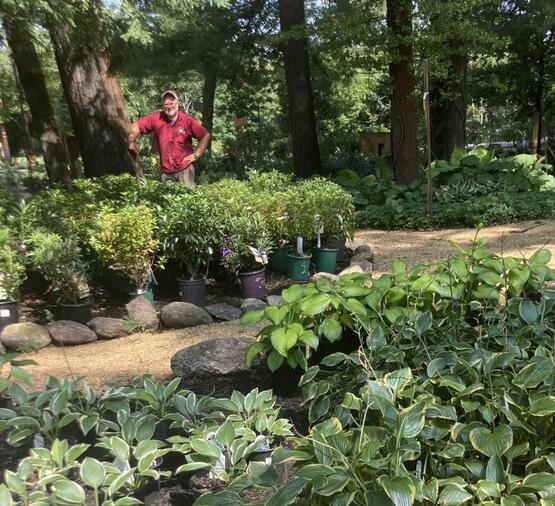 ​Past, Present, & Pollywogs
by Steve Hunt, visual merchandiser
Friday mornings, three young boys, my Mom, and my Dad piled into the AMC Hornet and traveled the Podunk Pike (Rt. 49) to Spencer to drop Dad off at work. Sometimes we’d even get to visit during the day. My brothers and I would enjoy that time, because Dad worked in a virtual wonderland. Bemis’ nursery was filled with trails of pea stone that wound through forests of hemlock and rhododendron.

Born in 1970, I spent my childhood in Charlton, MA. My mother, Barbara, stayed at home with three boys. My father, John, began working for Richard Bemis (known to my family as “Dickie” Bemis) in 1961 while studying at Stockbridge School of Agriculture. Dickie was part of a mentoring/internship program and my dad was lucky enough to have been selected to learn the horticultural trade under his capable guidance. Dad was a hard worker and fostered a life-long relationship with the Bemis family, spending many workdays on the road planting and landscaping.

At the nursery, there was a little pond nestled in the woods that sometimes held frogs and pollywogs. There was a bridge that you could sit on and rest. The paths led to two A-frame greenhouses with cedar shingles on the front. If we were lucky enough to come before Christmas, we’d see the workers sitting in front of small heaters making handmade wreaths out of chicken wire and mountain laurel (Dickie’s way of giving employees opportunities for money before Christmas). I think I even remember a playground where kids could play while parents shopped. However, it was simply the natural charm of the woodland setting that I loved the most. It rooted into my soul, laying dormant for 45 years. Through young adulthood I’d visit the nursery every once in a while, but not often.

The magic of Bemis Farms Nursery, however, perpetuates still. Who knew that 35 years later I would need a job, and find employment with the Bemis’s, just as Dad did over 50 years ago.

I suppose once Bemis Farms Nursery gets into your soul, it stays a lifetime. It’s like magic, I guess, because I don’t have any other word for it. Plants heal the soul...maybe that’s it. The symbiotic relationship between plant and person has been the focus of many scholarly studies in the past, and will be scrutinized long into the future. But there’s more to Bemis than that. Maybe it’s the setting; a beautiful combination of trees, shrubs, garden walkways with hostas and astilbe, and sunshine-filled areas with a myriad of sun perennials of all colors.  Maybe it’s the history of the farm that has appeal. Bemis Farms has been a working farm for over 100 years. Celebrated by the state of Massachusetts as a “100-year Farm”, it has progressed from cow farm, to orchard, to nursery. The adorable farmhouse on the hill across North Brookfield Road keeps watch over it all, assuring the history is omni-present to those who visit. Could it be that this is all in my head? I don’t think so. I hear the same sentiment from acquaintances and customers all the time. Just this past week a couple came in for some perennials, and said “We just moved into the area, and this is already our favorite place to go".

Time waits for no one.
I learned that lesson a long time ago. Running a successful nursery is hard work. Everything ages...the facility AND the people. Irrigation pipes wear thin.  Failed or outdated equipment sits dormant, waiting to be fixed. Cedar shingles decay. What used to be unsold shrubs become full-size trees, in some cases still poking through the pot or burlap sack. Gravel erodes. Metal rusts. Nobody is to blame. Even Frank Sinatra went from heartthrob to old crooner, and became what I’d call “a classic”. Tina and Ed Bemis have preserved the nursery and brought it light-years into the future with new greenhouses, high-quality, farm-grown plants, and the ever-popular workshops. Yet still, the nursery showed its age.

It was obvious to me that the place needed a face-lift. I expressed this to my dad one day when he came to visit me at work. I don’t know why I mentioned it, because I’m sure it was obvious to him, too. But, as dads often do, he offered me one thing. “There’s nobody better to help fix it than you”.

A little at a time I’ve been trying to recapture memories of my childhood at the nursery. I know it will never be the same place that lives only in my faded memories, but I’m hoping to re-polish the charm with more woodland garden beds, and pea stone walkways that disappear around the corner. I want people to wonder what’s just around that corner, and explore the nursery as I used to, with the curious eyes of a child.  I’ve also celebrated the farm’s history by incorporating old farm equipment at the center of many displays. I want to thank the amazing staff currently here at Bemis’s for working tirelessly to share the vision.

This fall, on your next trip to Bemis’s, maybe you’ll find me sitting under one of those trees with my metal lunch pail and thermos, just like Dad used to carry to work every day. And when you walk around and explore, I hope you’ll remember Dickie Bemis and all of his work building the nursery, and Roger ‘Grampy’ Bemis, whose initial vision built the cow farm and orchard. While you’re at it, give a nod to the venerable old farmhouse across the street that still watches over the nursery.